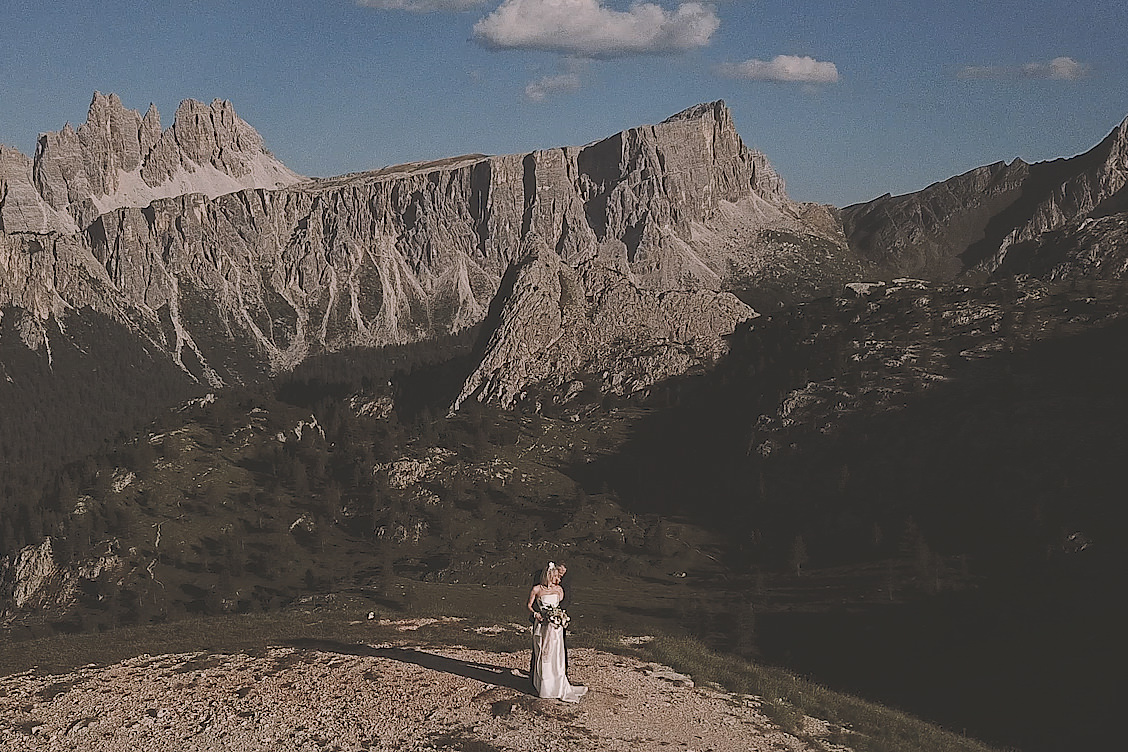 Jennifer & Jeff are both massive cycling fans. It was during a cycling holiday in the Dolomites that Jeff proposed to Jennifer, so returning to this stunning region for their wedding day was the the perfect choice. I’ll hand you over to the couple to tell you more about their love story and their cycling elopement in the Dolomites:

A Cycling Elopement In The Dolomites

Life is a beautiful ride – Jennifer & Jeff elopement in the Dolomiti mountains Cortina D’Ampezzo from whitesfilm on Vimeo.

I am a Registered Dental Hygienist, and Jeff was new to my office as a patient and was scheduled in my chair in 2009. He literally landed in my lap! His appointments would always run long because we found we could not stop talking with each other. We would often times run into each other out and about, around town, now that we knew each other. We would find ourselves talking with each other then, and exchanging long glances. We soon discovered that we were not always far from each other. Jeff went to college, just North of my home town. He was from Connecticut and I was from New York. Later on, we both resided in Minnesota at the same time, approximately 50 miles away from each other, he for 4 years and I for 2 years.
In 2017, Jeff and I planned another cycling trip. This time to Cortina, Italy, Austria, and Kransjka Gora, Slovenia. While the first leg of our trip had us in Cortina, the first day we rode up Passo Giau, from Cortina, then down the backside, to come back up, and down to Cortina. Over 5,000 feet of elevation our first day. The second day we drove to Corvara in Badia and parked in town, and rode our bikes up Passo Gardena. The third day was Tre Cime! We rode our bikes from the hotel up through the town of Cortina to Tre Croce, to Lake Misurina, up to Tre Cime. While we were riding up it started freezing rain. Our goal is to always climb without stopping until we reach the summit. We both made it. We went in to the restaurant at the top and had pasta Bolognese and a cappuccino to warm up and allow the weather to pass. Once we were done the sun came out and Jeff suggested we go to another location so we could see Lago Auronzo Di Cadore. We parked or bike against the rail. Jeff climbed over the rail. I asked, “Babe, what are you doing?” It was steep where he was. His reply, “I am picking flowers.” I thought , how sweet. I never once thought they were for me. I turned away and continued taking pictures. I turned around and he was standing behind me holding the flowers, I continued taking more pictures. Then I heard, “hey Baby “, I turned around and he was down on one knee. Then, I got it, I understood what was going on. He then asked me to marry him, I got down on why knees with him, and said, “yes!” An interesting side note…while climbing in the freezing rain, at one point I actually thought, “he should want to marry me, I am pretty amazing, no one has ever seen the things I can do, like he has. As soon as I thought it, the thought left my mind and never came back as I continued to ride. I was never at any point expecting a proposal, because I knew he did not have a ring. He would be a nervous wreck trying to protect/hide it. I do have some of the photos from before the proposal when he was picking the flowers he asked me with (which I dried and then pressed). I also have a photo from when I turned around and he was standing there holding them infant of me.
We chose Cortina because we both love it so much. Jeff proposed to me there. We chose Cinque Torri because it is one of the only sites where you can get married outside, and it is along a cycling route, Passo Falzerego. We rode our bikes up Passo Falzerego the day of our wedding, submitted and descended back down two miles to the chair lift to Cinque Torri.
I googled weddings in Italy. I liked Italy 2 Wed website, they seemed attainable. I liked what I read on the website about the people that work for them. I was assigned to Gemma. Gemma then chose all of the other vendors for us. I told her what we were looking for. She also suggested a videographer, which I was not interested in. She had me watch a 3 minute video of another wedding video the videographer created. I was teary eyed watching another couples video, and Gemma said he had a drone which would be fantastic in the mountains, SOLD!
Since we are avid cyclists, we wanted to climb the day of our wedding. We love climbing the mountains by bike, I was proposed to on a mountain top, we should also get married on one. Jeff always has said to me, “I’ll take you higher Baby!” He has not disappointed.
Jeff says, “reading my vows to you in that magical place”. Jennifer says, “listening to Jeff reading his vows to me”.
If you are considering this type of a wedding, go for it. it just takes planning. If you can dream it, it can happen! It was truly amazing, it was difficult taking in all of the magnificent beauty surrounding us in that location.

Want some more inspiration from the Dolomites?

What To Expect From Your First Mountain Hut Experience