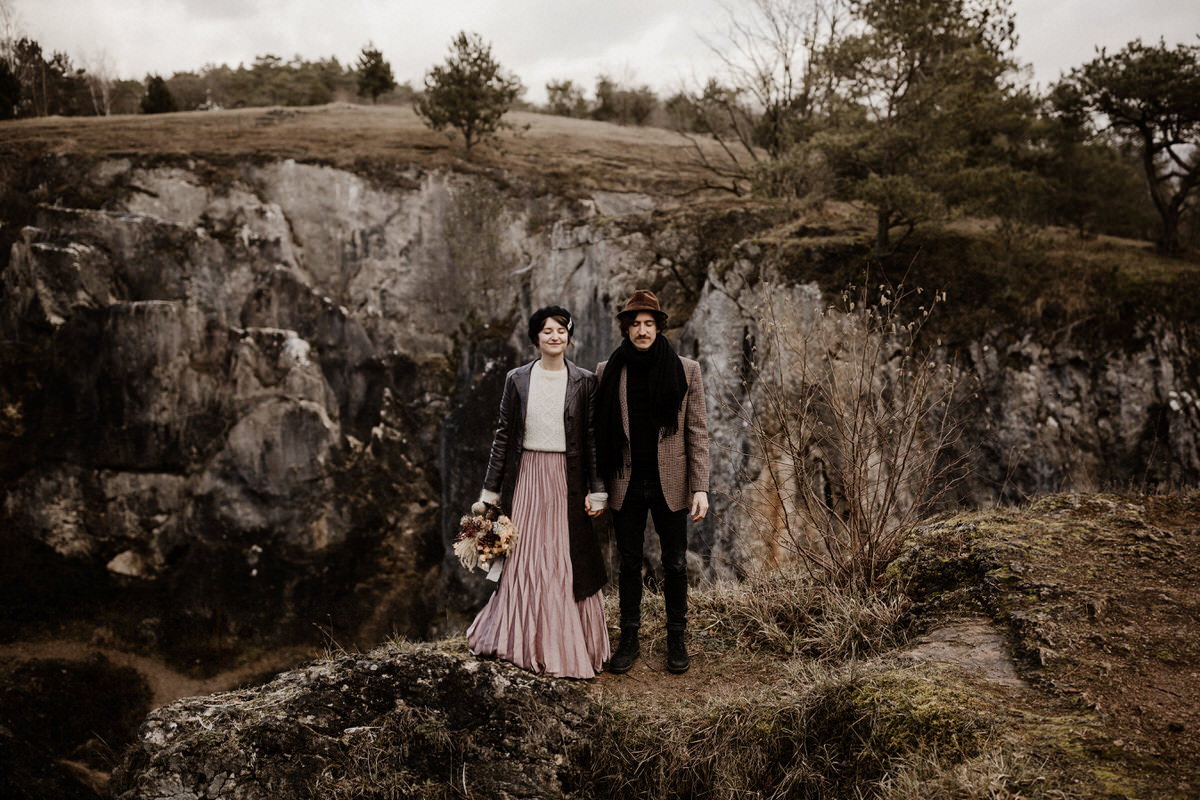 Nimue and Pieter’s elopement in Belgium was done on super short notice. Both introverts, the idea of a big wedding just didn’t feel right. They got ready in their own home and drove to the south of Belgium to say their vows and celebrate with bubbles, just by themselves in the middle of nature. They started the day with breakfast and getting ready together in the warmth and cosiness of their own home in Flanders and drove to the Ardennes for an afternoon filled with little adventures. The spot they had picked is Fondry des Chiens, which is also jokingly called the “Grand Canyon” of the Ardennes.

A winter Elopement in Belgium’s Ardennes

Tell us how you met?

We met in September 2006 on a dance organised by one of the local youth associations during the village carnival. At one point everyone was doing some sort of dance to the song In Zaire by Johnny Wakelin. We both didn’t know the steps and also both though these types of group dances were rather silly. We exchanged some understanding looks, one of the next songs was a slow, Pieter asked Nimue to dance and the rest is history! Well, actually we were both quite shy and unexperienced when it came to relationships, so it took us another 2 months of texting and very awkward flirting until we were officially “together”. 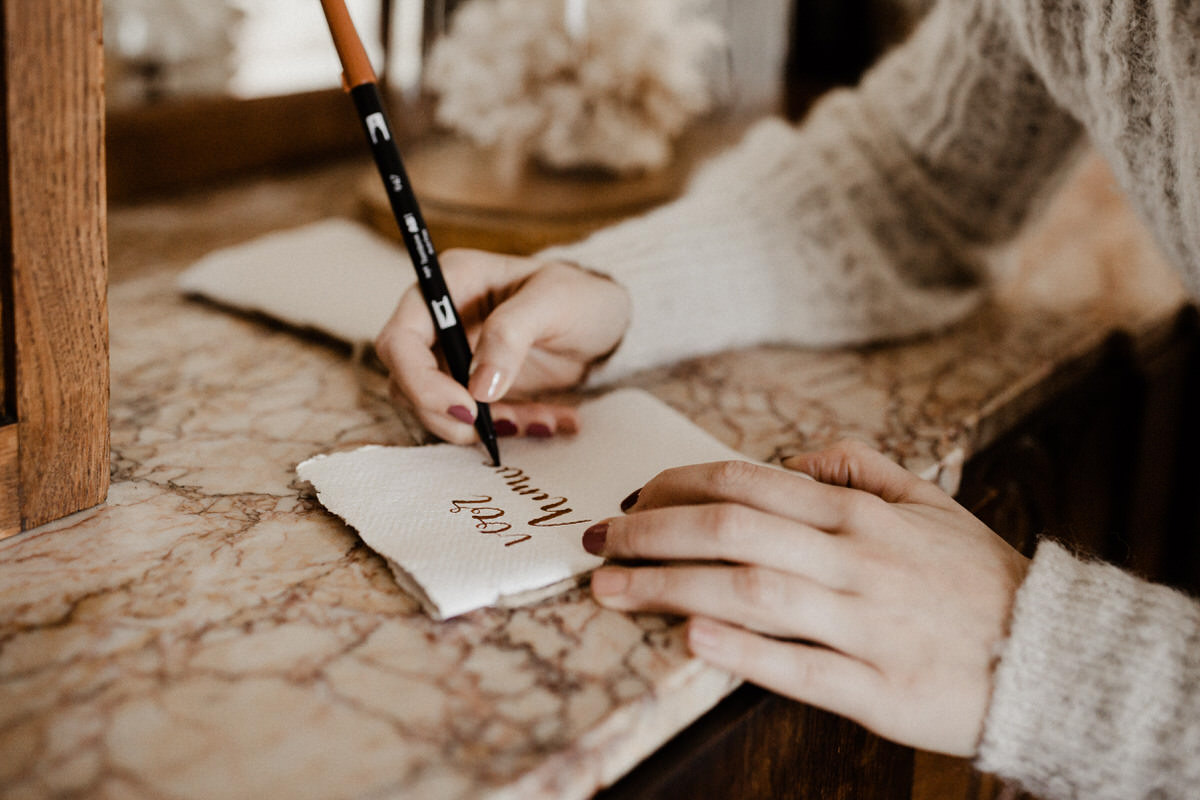 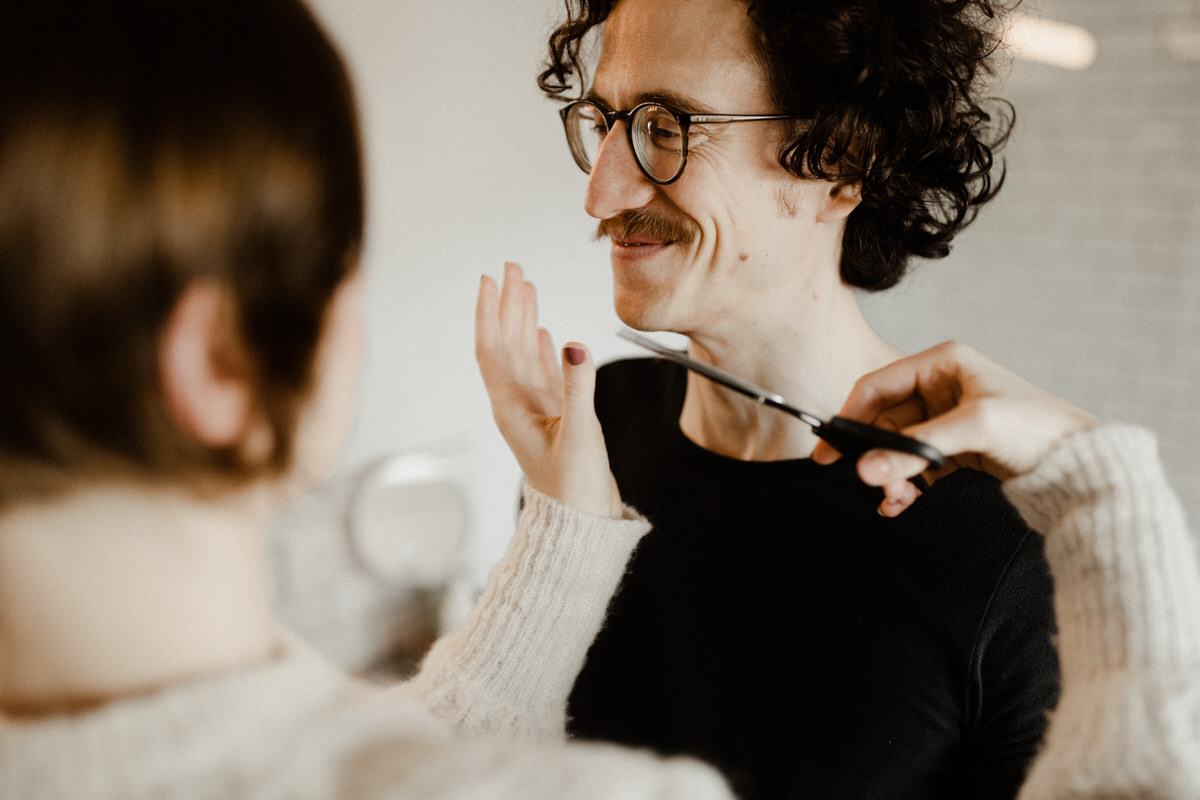 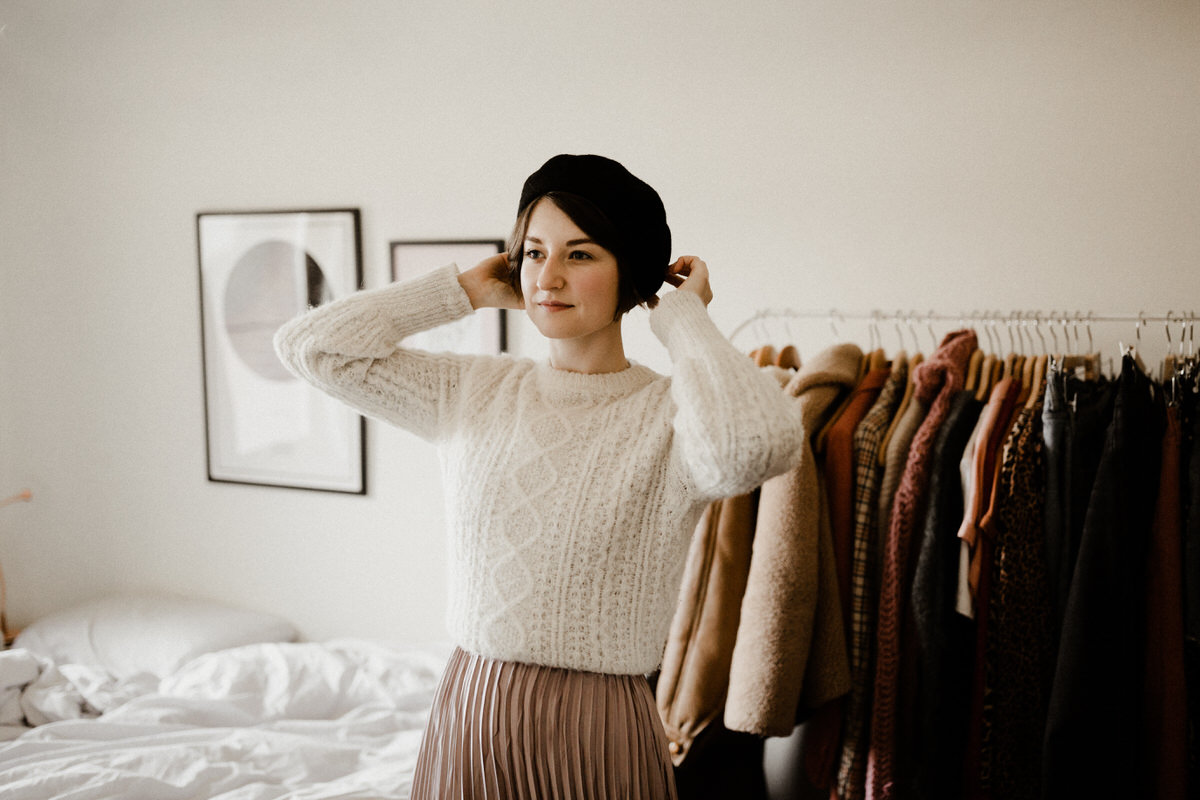 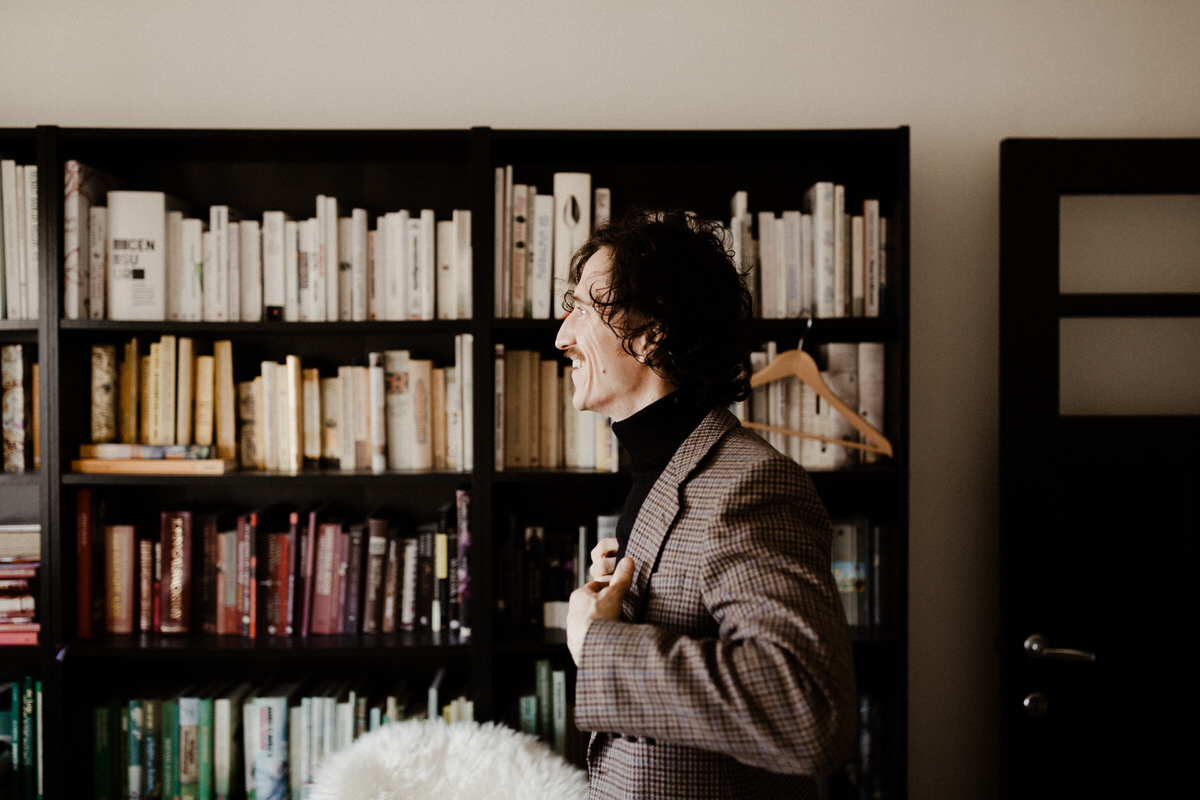 Tell us about the proposal?

Pieter proposed to Nimue in september 2019 while on a holiday/family visit in Italy (Nimue’s mom lives there). We went on a hike to the Monte Sorratte. Nimue was completely unaware of what Pieter had planned (though she had been dreaming of an engagement for about 7 years and had almost even resigned to the fact that maybe Pieter just wasn’t the marrying kind). When they had reached the top and were taking a break to enjoy the spectacular view, Pieter went down on one knee and – slightly nervously – popped the question. Nimue cried tears of joy all the way back down the hill.

Why did you choose your wedding location?

Nimue went there on a location scouting trip with her sister, Isis from A Tale of Two lovers, a few months earlier and fell in love with the place. We love exploring beautiful new locations close to home. Fondry Des Chiens in Nismes was the perfect location for our elopement adventure. For beautiful landscapes you really don’t have to go all the way to New Zealand or Canada. 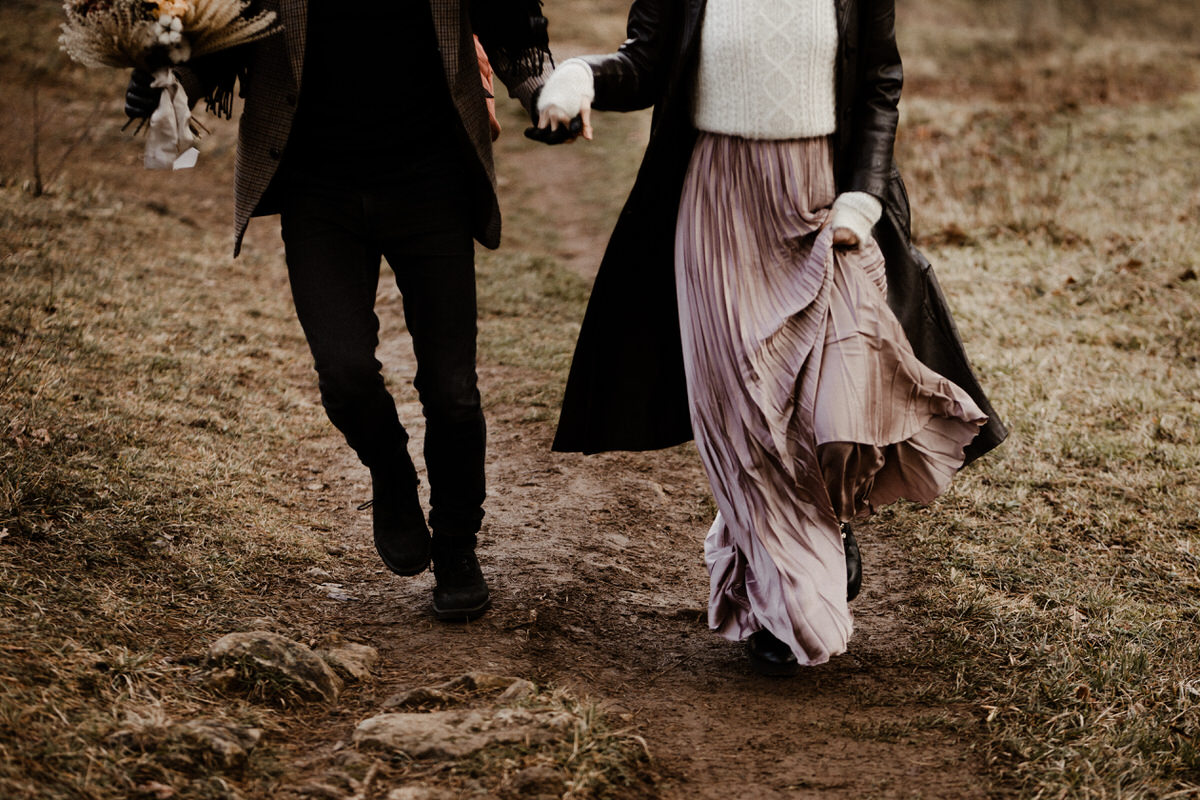 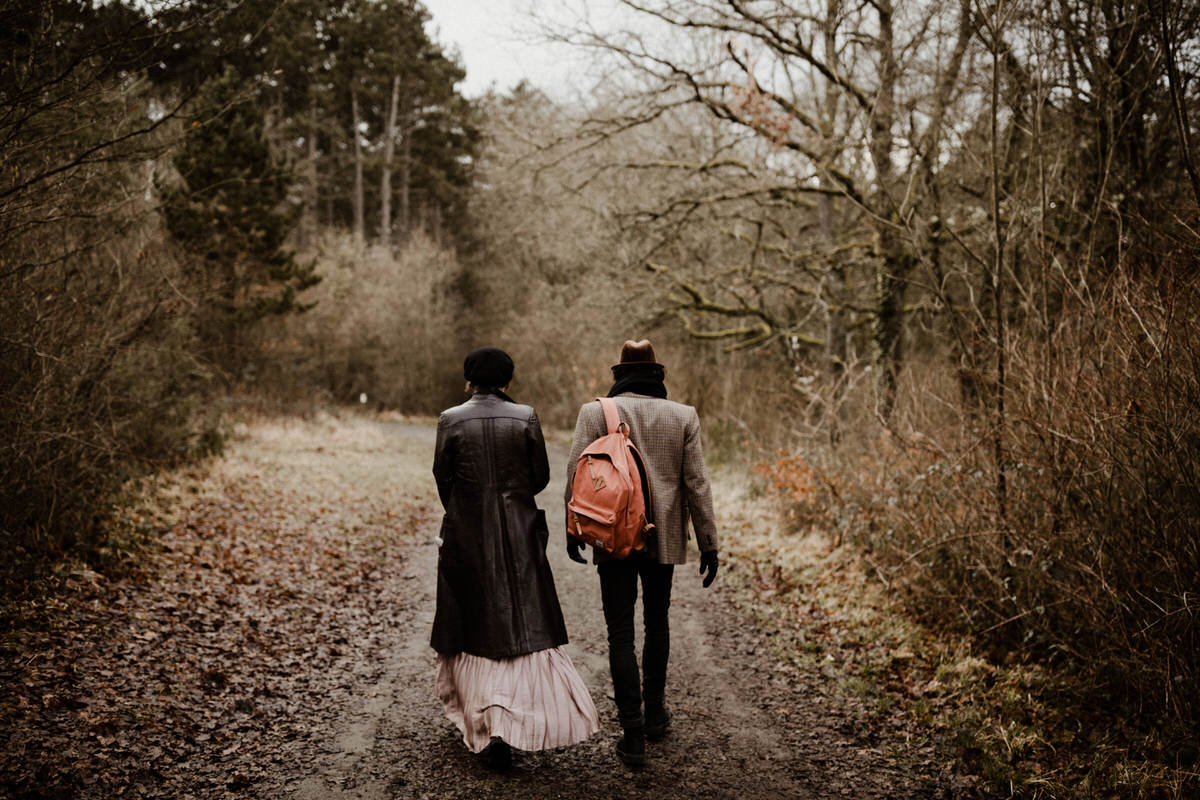 What was the inspiration behind your wedding day?

Nimue: We already knew that we wouldn’t be able to enjoy an entire day filled with socialising (being introverts and all) while making sure that everybody was having a good time too. What we loved most about doing an elopement in Belgium is that the day was truly about us.

Pieter: An elopement was really made for us. I’ve never been a fan of traditional weddings that take up the whole day. An elopement was a way to focus the day on us, and it was delightful to not hardly have to plan anything and just go with what felt good instead.

Isis: The couple and I had planned couple photo session for that day, but two weeks before the shoot date Nimue contacted me to say they had decided to elope. She had been trying on her dress for the shoot that day and that moment it hit her that she was as ready as can be to say her vows. They got engaged a few months earlier on summer holidays in Italy, and weren’t originally planning to get married before 2021.

Any family or religious traditions incorporated into your day?

Just us, reading our vows. 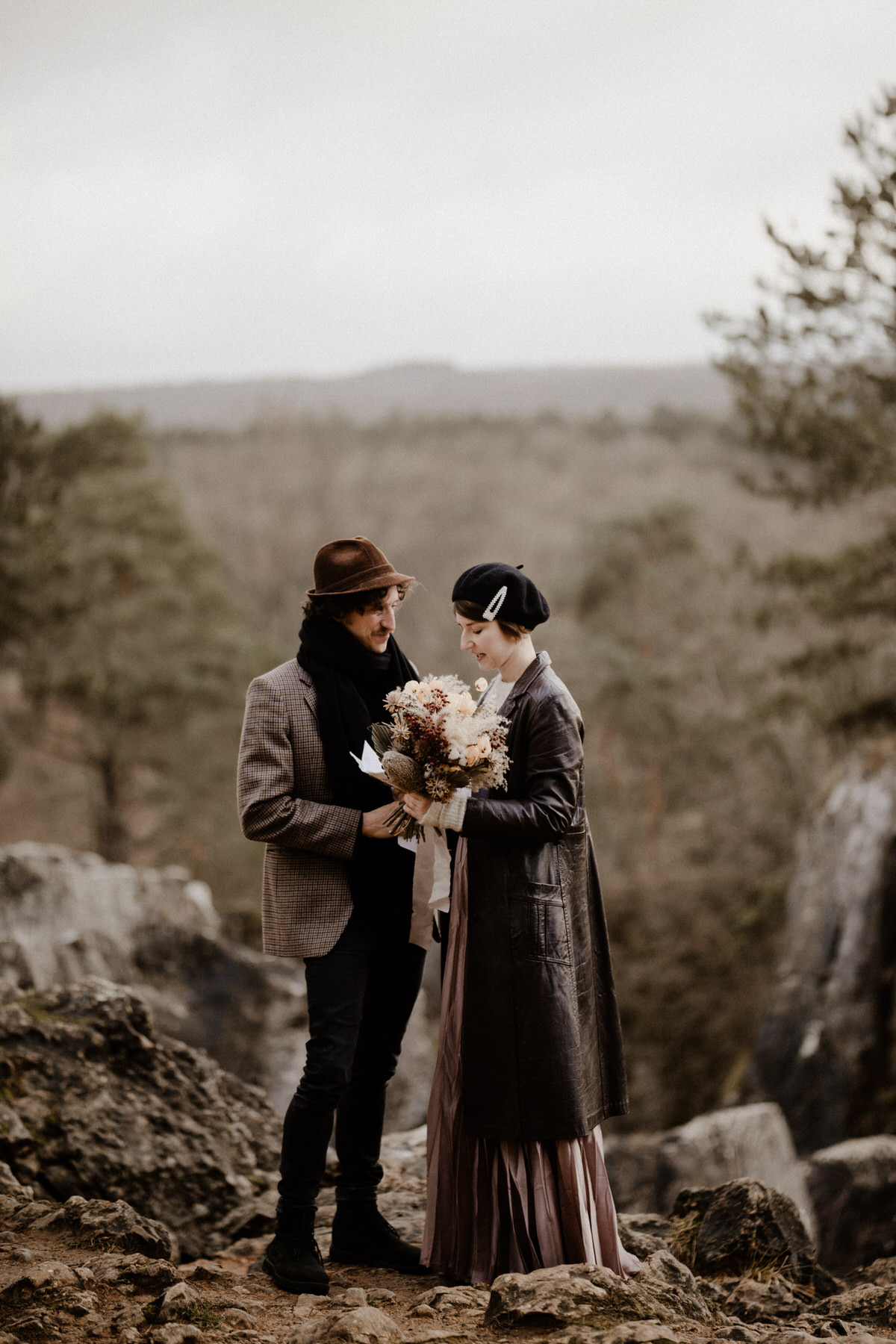 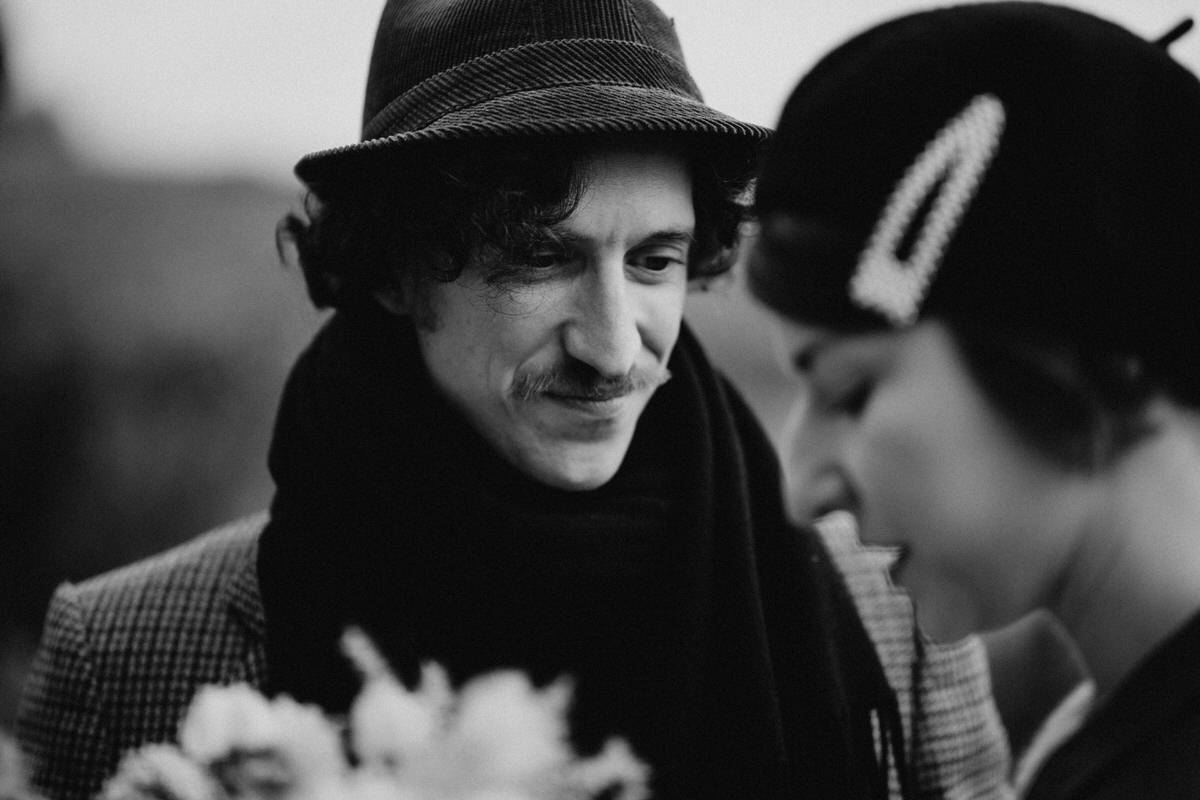 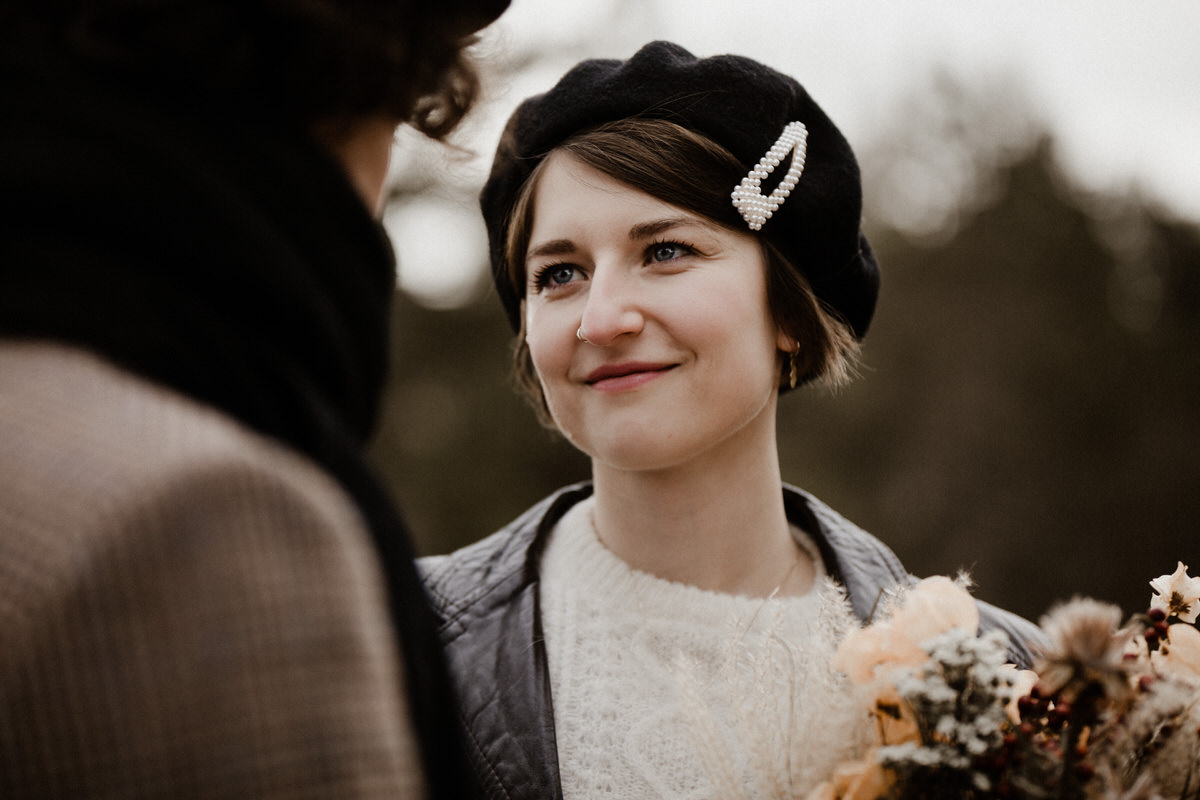 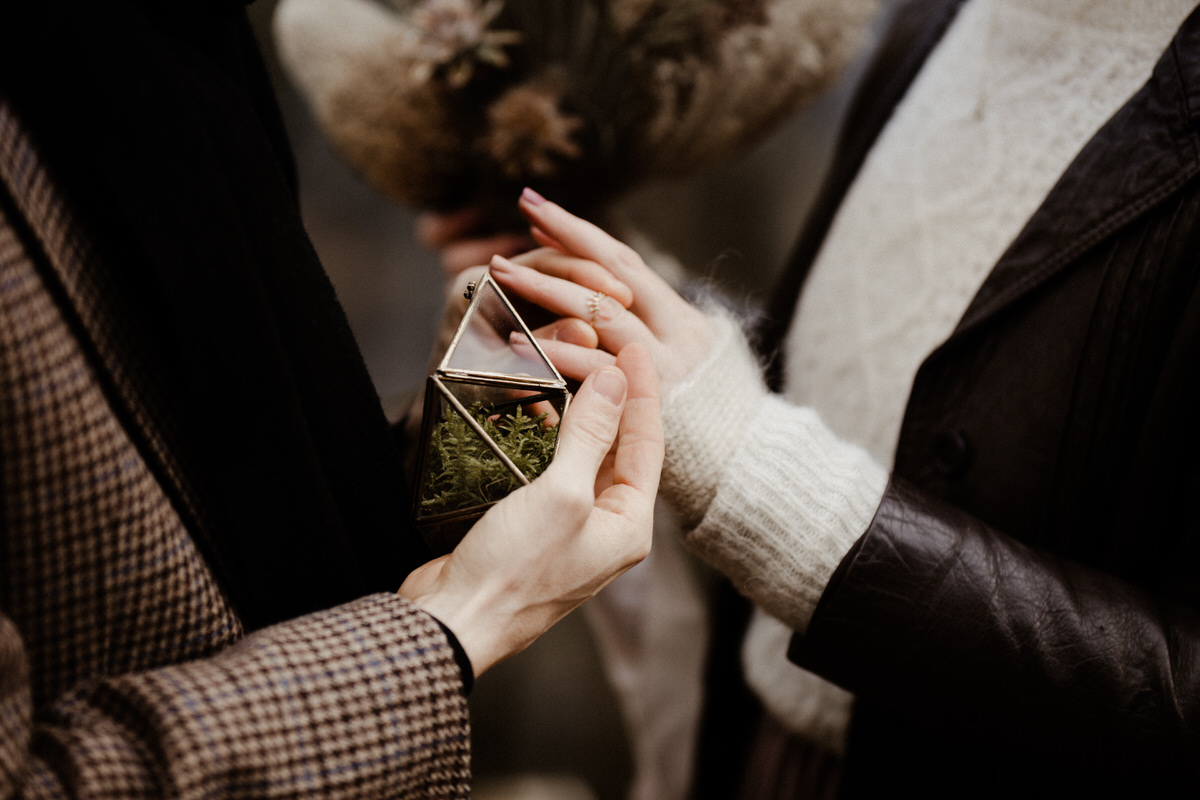 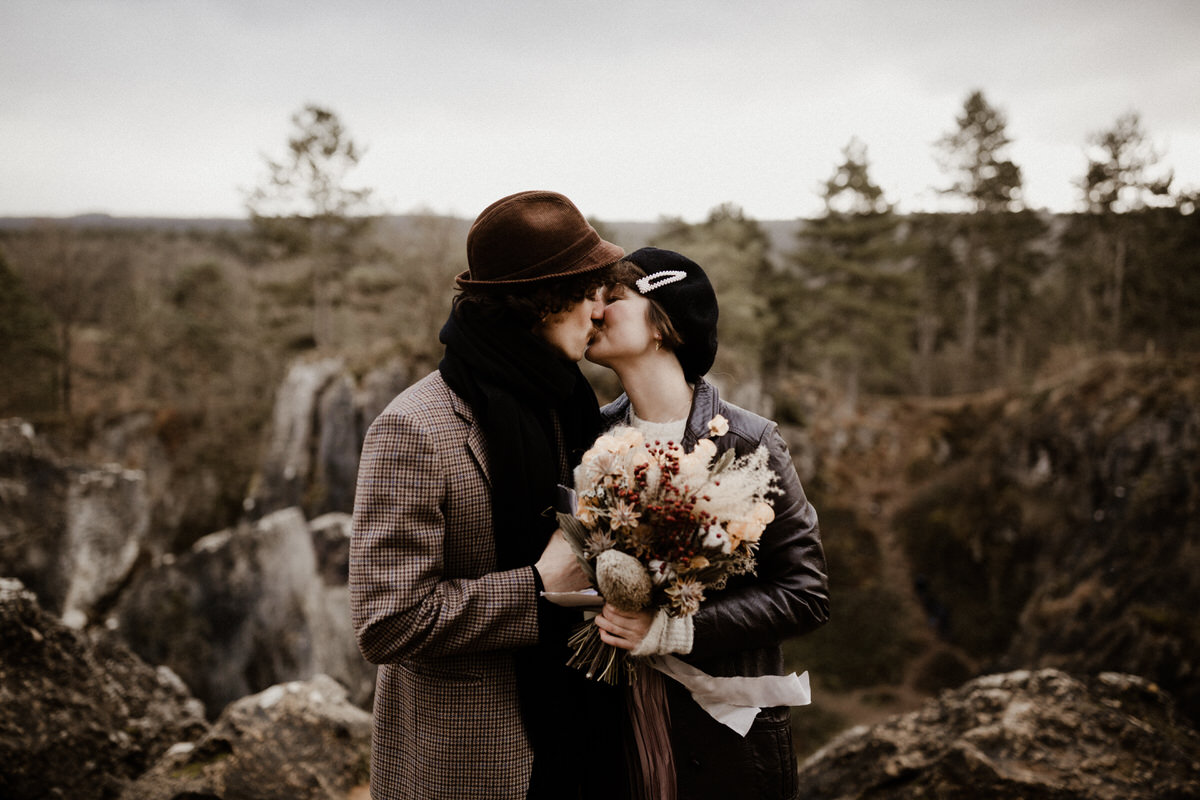 Any funny stories from the day and/or the planning process?

A fun fact to mention is that we wore mostly favourite pieces that we already had in our wardrobe, among which a vintage leather coat, thrifted blazer and vintage sequin bag. Oh and Nimue’s dress was second hand H&M, found on Vinted.

What was your favorite moment of the day?

Pieter’s favourite moment was when Isis was taking pictures from us, standing on the other side of the gorge and it felt like we were there just the two of us, looking all pretty, cuddling and kissing and enjoying each other’s company. For Nimue it’s impossible to pick a favourite moment, because even though her hand were freezing (it was january after all) she felt like she was living the most perfect winter fairy tale all day.

Nimue: It was in the midst of winter and pretty cold, but that also meant we had the location all to ourselves. We had a whole afternoon of gazing into each other’s eyes, giving kisses, drinking champagne and enjoying the wonderful scenery. It felt like living a winter fairytale. I have to confess that by the end of the day my hands felt like ice lumps (despite hand warmers and heating pads), my nose was runny and it took me half the ride home to warm up again. But it was totally worth it. The cold gave a sort of magical, mystical, dreamlike allure to the whole day. Like nature was asleep and we got to walk through its dreams, just the two of us. Also, cuddling together and giving kisses was extra nice because that meant benefiting from each other’s body warmth 🙂 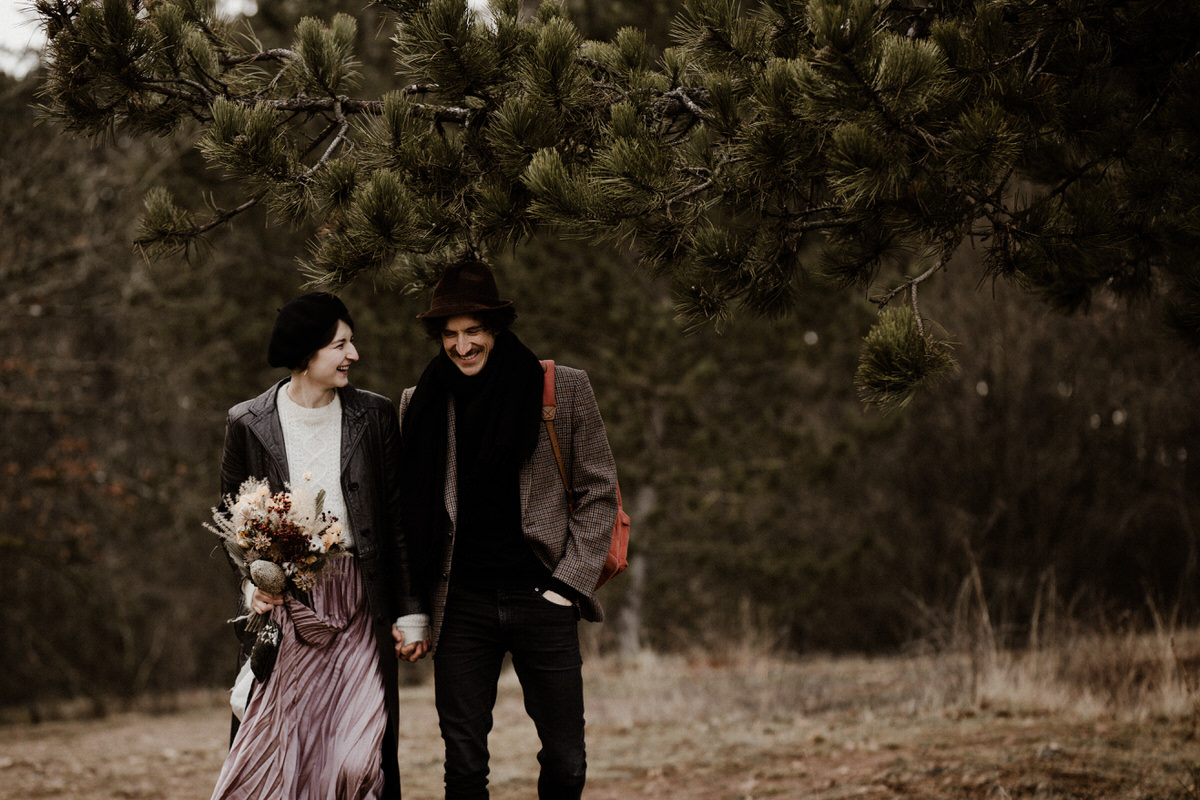 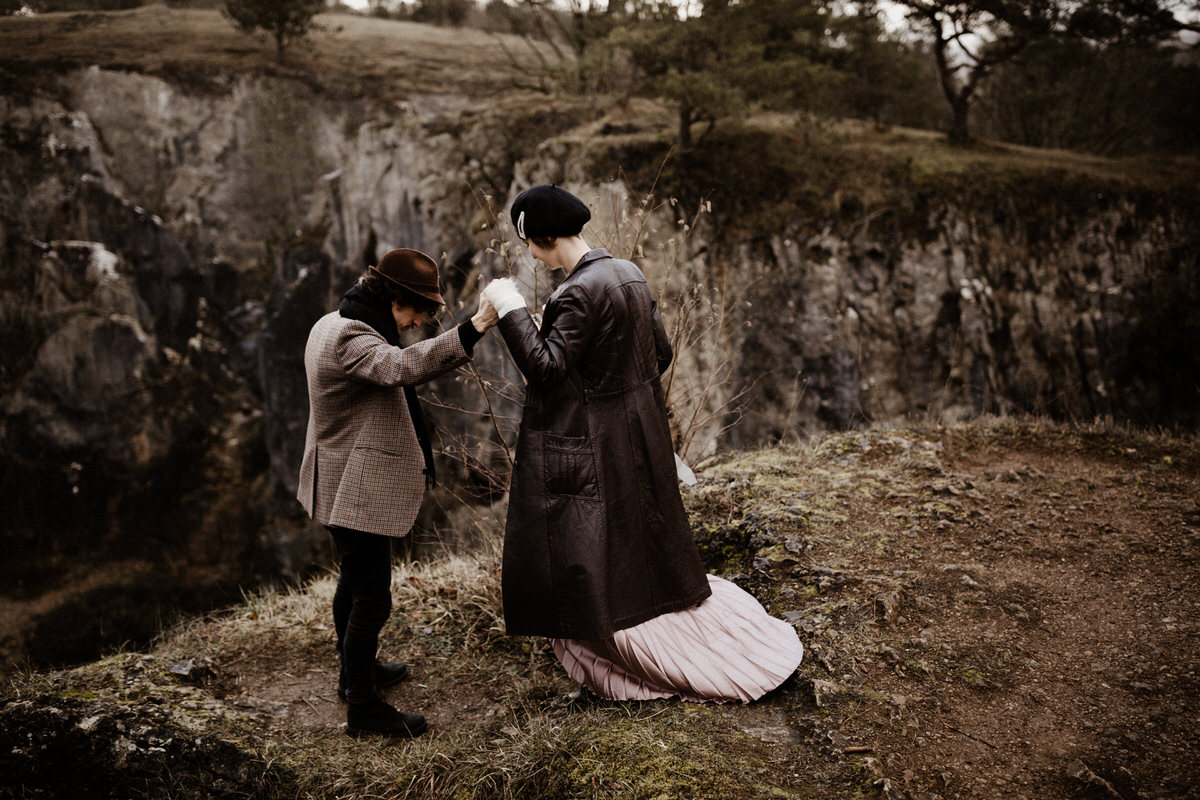 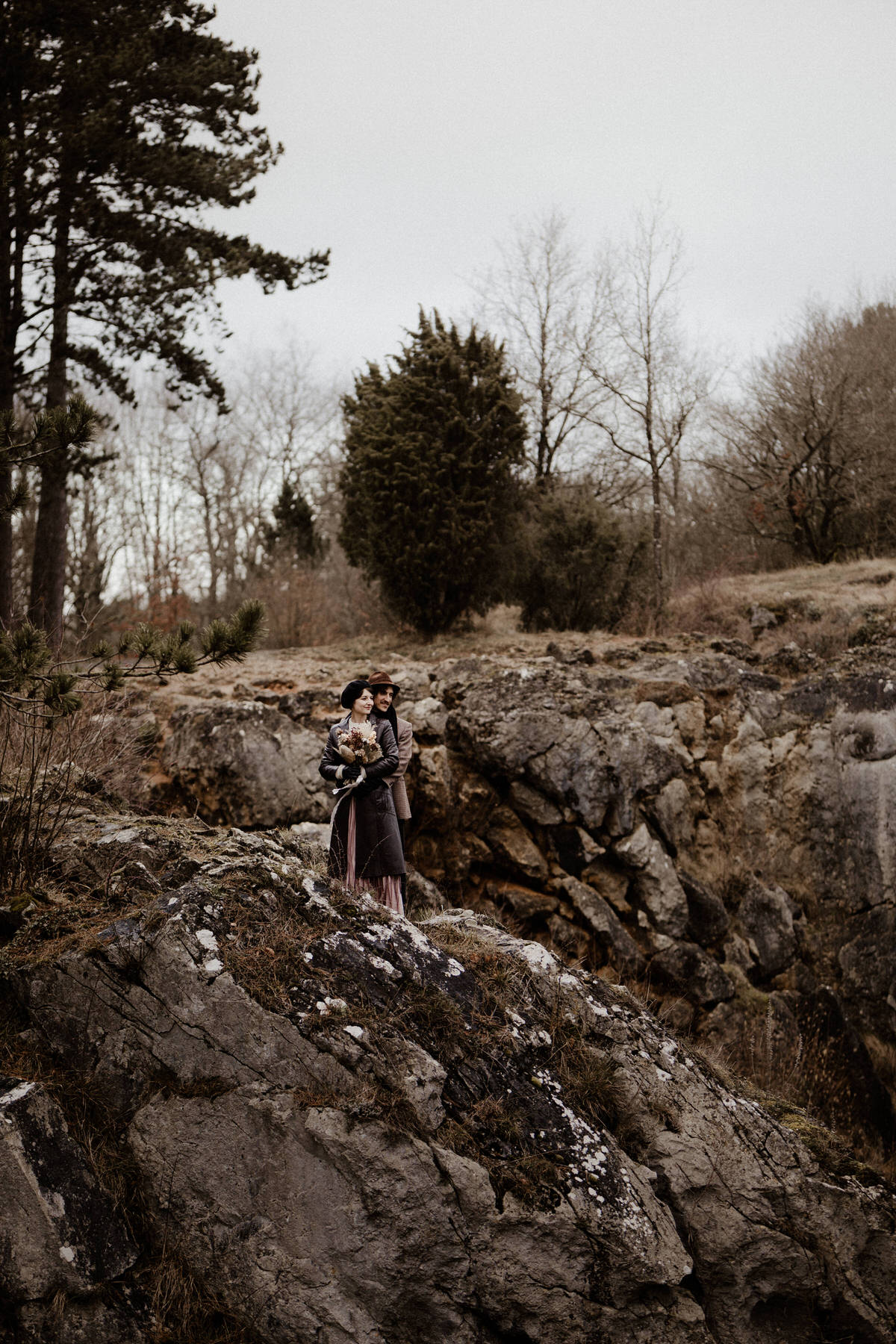 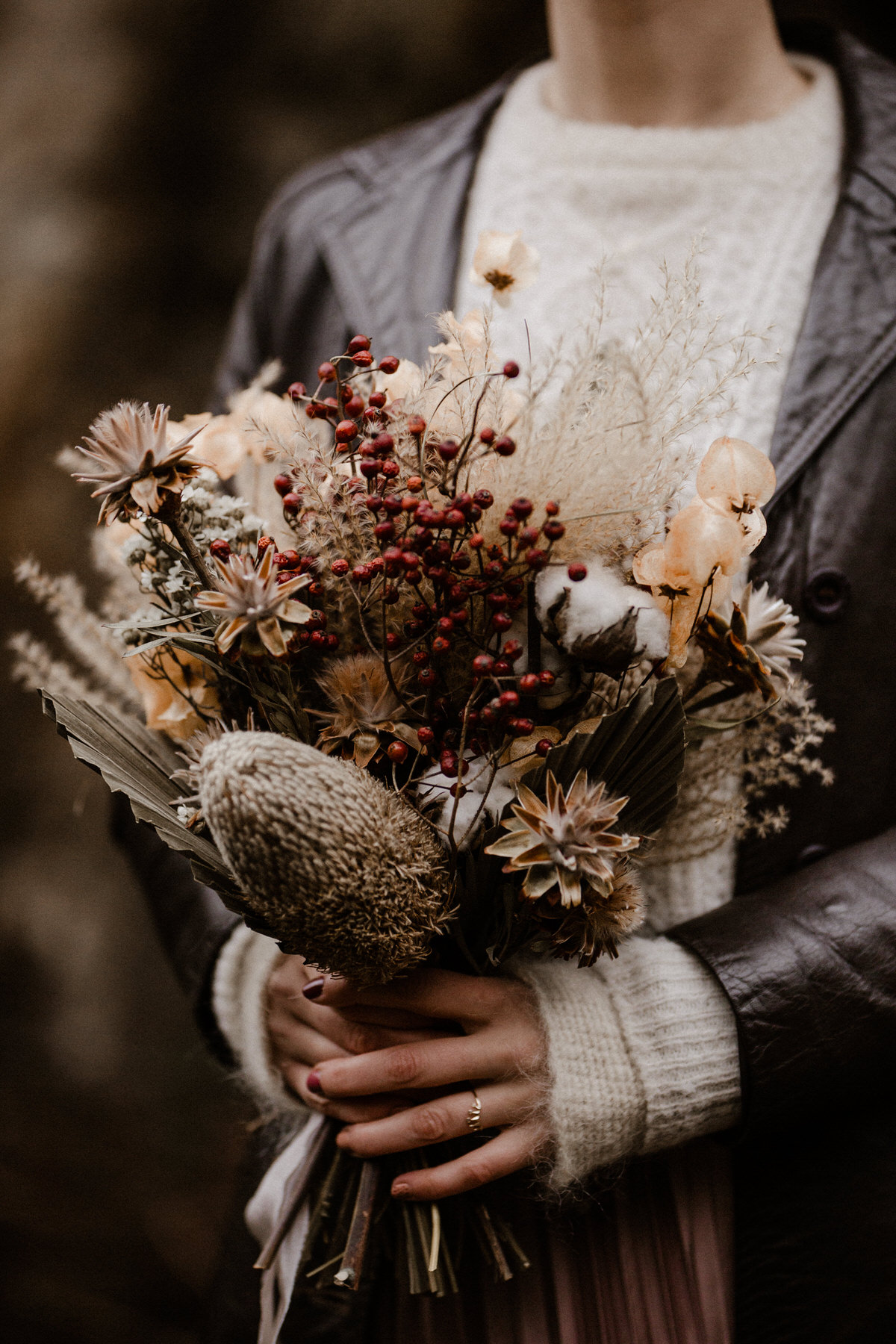 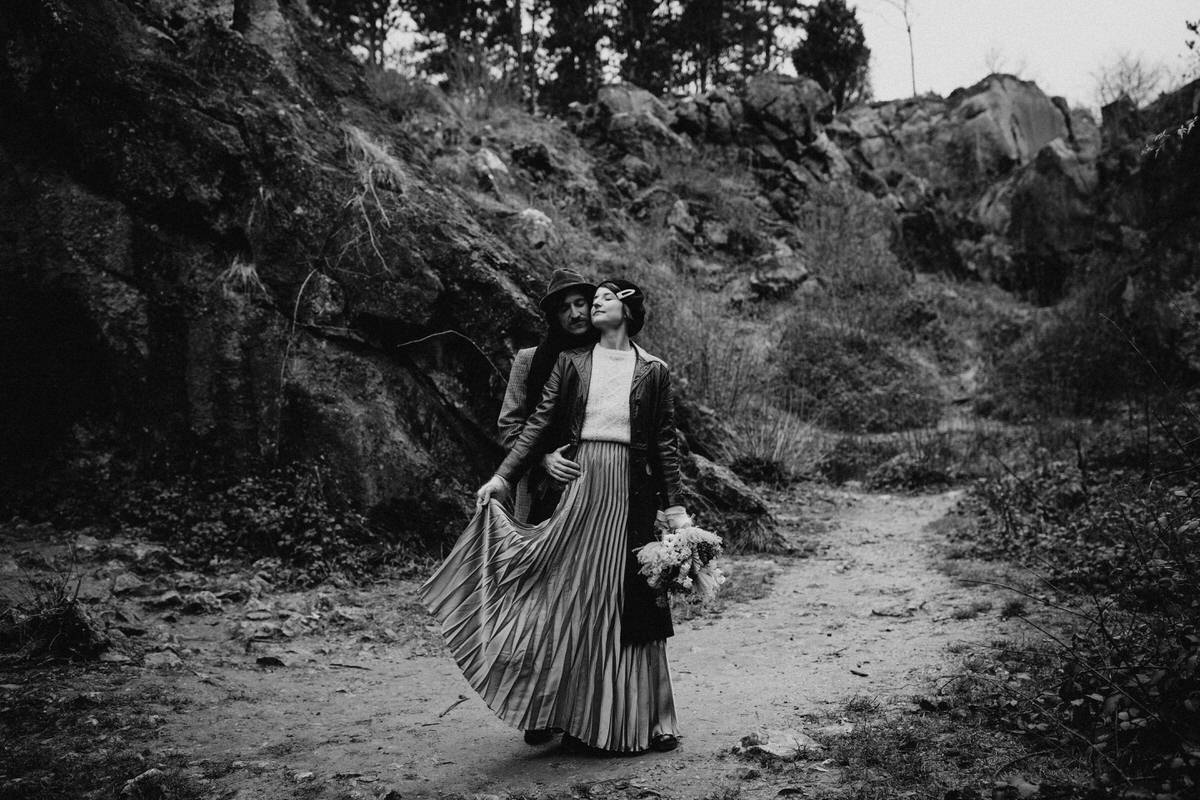 Anything you are really glad you did? Or wish you didn’t do?

Eloping in Belgium was just perfect for us, two introverts. We wouldn’t have wanted it any other way. It really all was very last-minute. The only preparations we did was write our vows, pull together your outfits and secure a bouquet.

Any words of wisdom for other couples?

Make sure to make your day all about you and the love you share. Other people’s expectations shouldn’t matter. 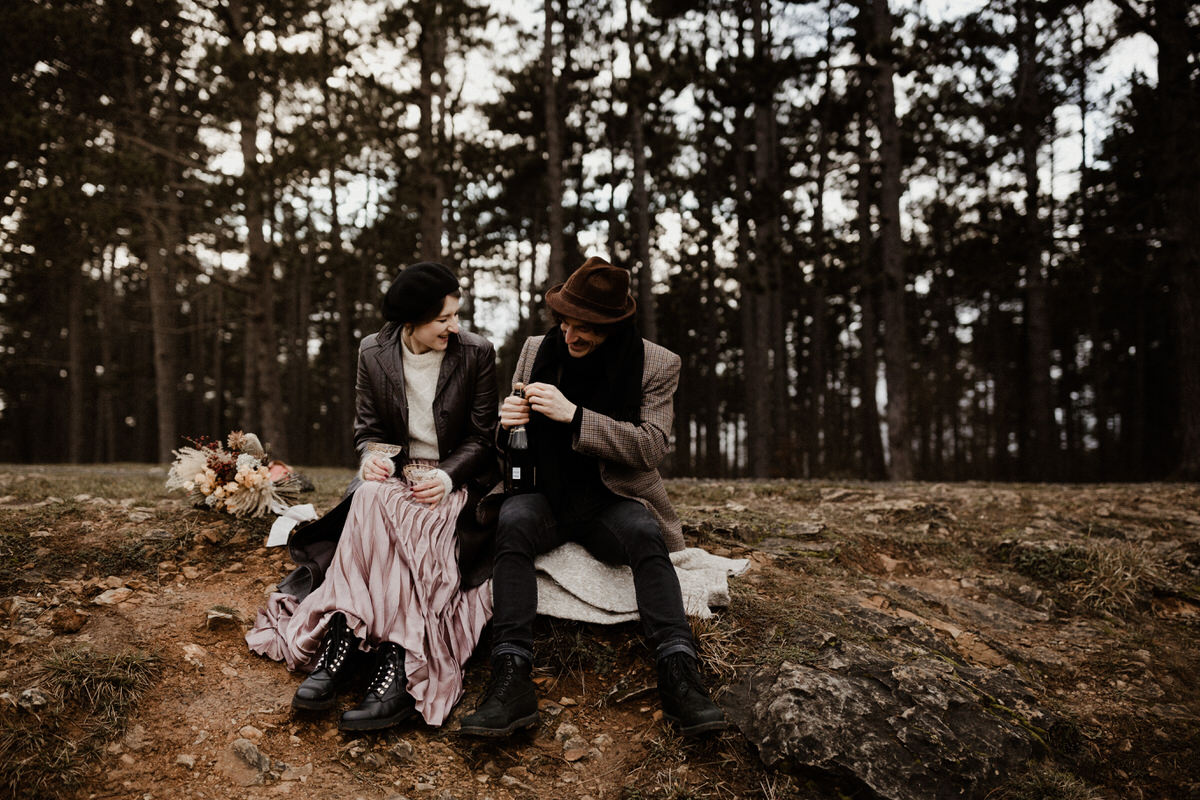 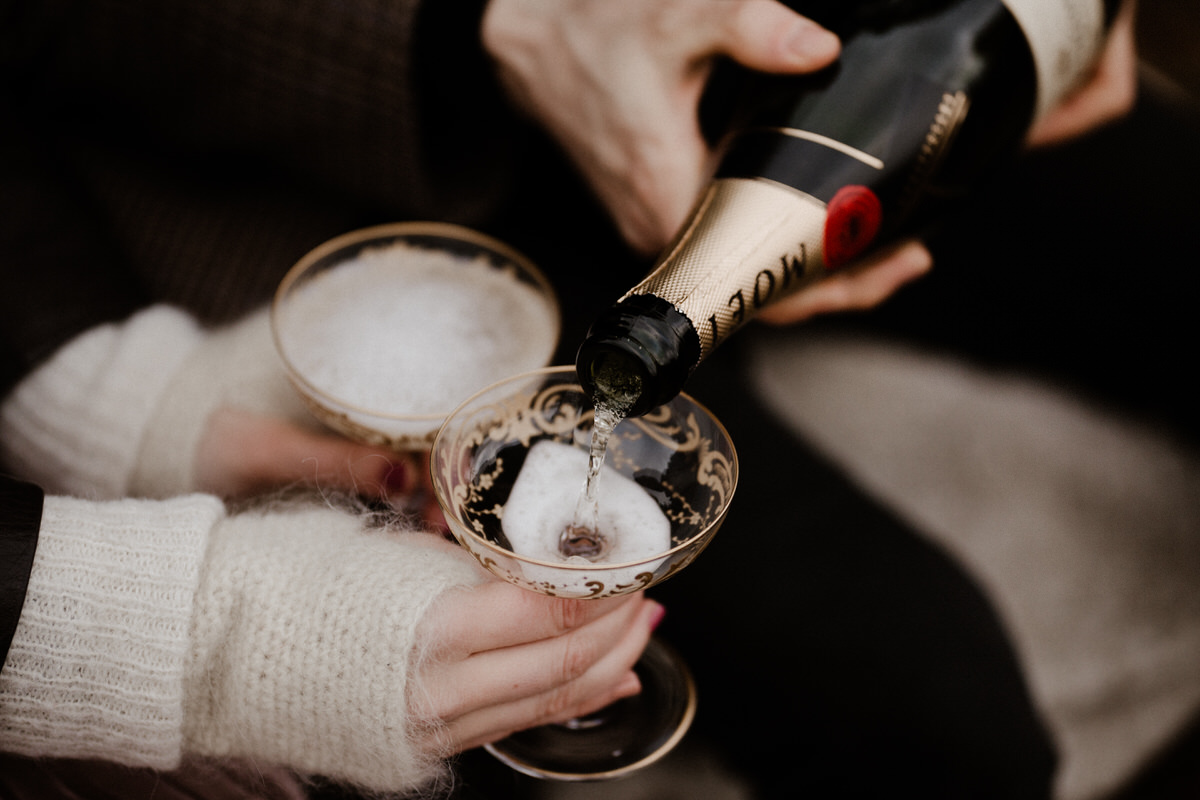 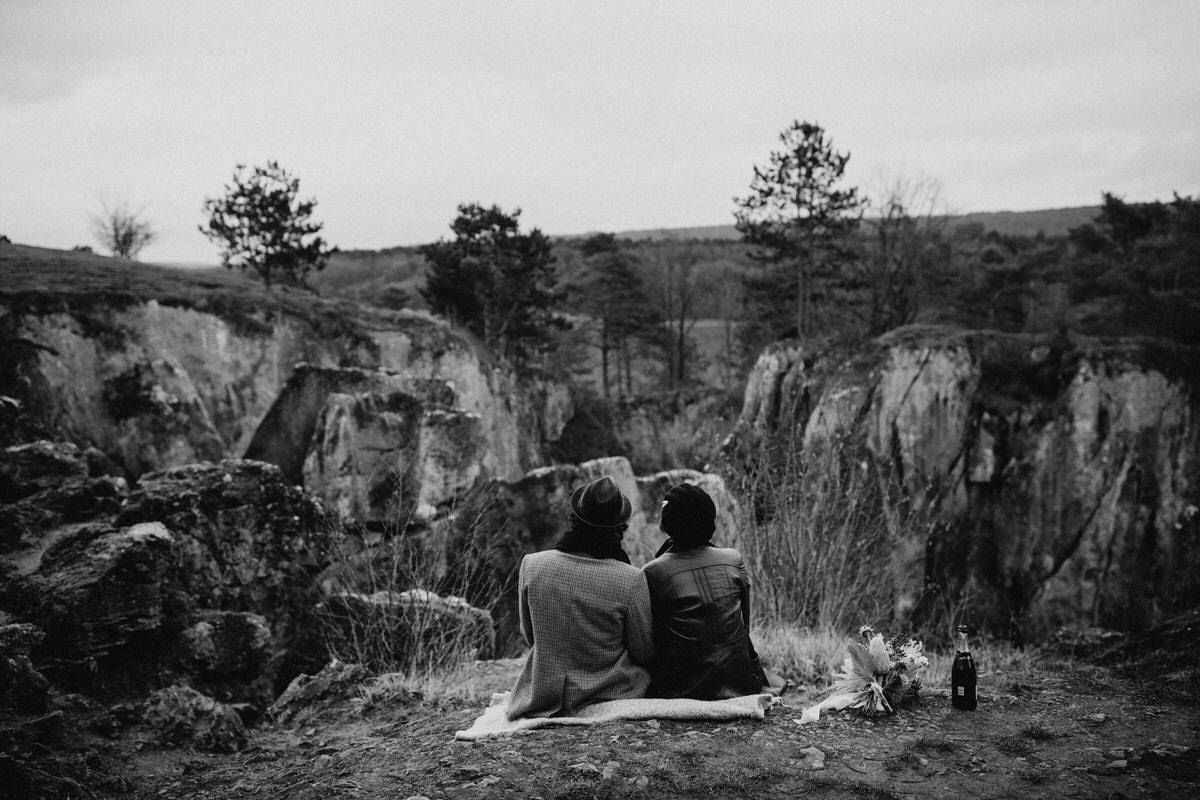 Yana is the Editor of We Are The Wanderers blog since June 2020. She is also the founder of Peach Perfect Weddings, a destination wedding company that creates unique elopements and intimate weddings all over Europe.